What is a MEID

MEID stands for Mobile Equipment Identifier and is a unique identifier for a mobile device. MEID is a form of ESN (Electronic Serial Number). MEID numbers often have multiple formats, MEID HEX and MEID DEC. The HEX value is a mix of letters and numbers and the DEC value is all numbers. When an MEID is requested, unlockr generally uses and asks for the MEID HEX, which looks something like this: A1000013F2000R


What is an ESN

ESN or “Electronic Serial Number” is a unique 32-bits identification number embedded by manufacturers in wireless phones.In addition to being programmed into the phone’s microchip, the ESN typically is found on a label under the cellular phone’s battery. The ESN is automatically transmitted to a base station when a call is made. The number is used to authenticate the validity of the phone to prevent fraud. ESNs are currently mainly used with CDMA phones. The first 8 bits originally represented the manufacturer code, leaving 24 bits for the manufacturer to assign codes to mobile devices. This system allowed for up to 256 manufacturers and up to 16,777,215 unique codes for each manufacturer’s mobile devices. To allow for more manufacturers, the manufacturer code was extended to 14 bits, leaving 18 bits for the individual mobile device codes. With this system, the manufacturer could only assign up to 262,144 codes. In 2006, manufacturers started running out of unique ESNs, requiring a transition to the new MEID standard to replace ESN. ESN number is located under the battery, below the battery, on the back or bottom of the device. 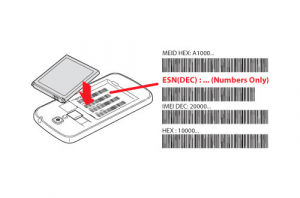 What is the Blacklist

Phone Blacklist is a list of blocked IMEI numbers generated by the operators. It contains the IMEI numbers of phones which have been reported as stolen or lost. If the phone is placed on the blacklist, it becomes useless. It is impossible to make and receive calls since the signal to the phone is blocked. You can check if a device is reported as lost or stolen in North America by using our free imei lookup tool from your unlockr dashboard.

What is an IMEI

The IMEI can be displayed on the screen of the phone by typing *#06# into the keypad on most phones. An IMEI (International Mobile Equipment Identity) is a unique number to identify GSM, WCDMA, and iDEN mobile phones, as well as some satellite phones. The IMEI is only used for identifying the device and has no permanent or semi-permanent relation to the subscriber. Number is used by the GSM network to identify valid devices and therefore can be used for stopping a stolen phone from accessing the network in that country.

Can your phone support oversea's carriers

The first thing to check is whether your phone will physically work overseas. Different countries and cell companies use different technologies and frequencies, and your phone needs to be compatible with them to work. The most common cellular technology is GSM, and it’s widely used throughout much of the world. CDMA is less common, but it is used by Verizon and Sprint in the United States, and a few carriers elsewhere — if your phone only supports CDMA, it’s highly unlikely to work internationally. Even if you do have a GSM phone, though, you still need to make sure it supports the frequencies used in your destinations. For the ability to send and receive calls, texts, and 3G data in most of the world, look for the words “quad band” or the specific bands 850/900/1800/1900 MHz in the specifications. If your phone supports all four, you won’t have many issues while traveling. This page lists the exact GSM frequency details for pretty much every country. But, don’t fret, as phones are built these days to work in multiple countries, so there’s a 99% chance your phone will work overseas.
Tags: Articles, Blog post, Mobile repair stores, Troubleshooting
Share
Previous articleNext article